After extensive and properly guided research, we bring to you the top NFT projects you should probably know about and follow in 2022. 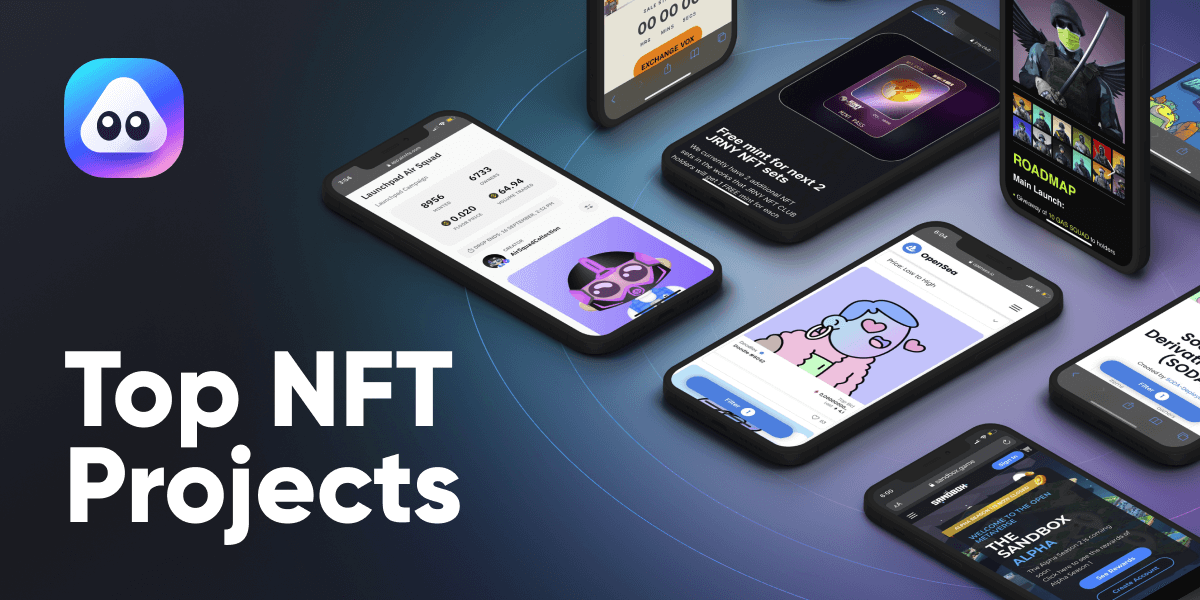 The crypto and the digital world are buzzing, with many NFTs being put up for sale. There are already millions of NFT assets for sale on platforms like Opensea, Rarible, Foundation and AirNFTs, and there is you, with some money to spare, looking for the right project to invest in. Just as you may want to acquire an asset just for the fun of it or because you have a connection to it, NFTs can appreciate, and you can make investment returns from NFT assets if you get into the right project.

Axie Infinity is a trading and battling NFT game in which the players collect, breed, raise, battle, and trade creatures called Axies, which are digitized as NFTs. To be able to play, new players have to purchase at least three Axies. It is an Ethereum-based project, and players earn tokens that are cashed out every fourteen days. Assets that are collected in the game can be exchanged as NFTs, including virtual land.

Sandbox is an NFT game wherein players acquire the form of a god and create their universe with the elements provided to them in the game. The game's blockchain version now allows users to monetize their creations, called Voxel Assets, and their gaming experiences, as NFTs. With over $100million invested in this project, it is a safe NFT project to invest in.

‍Sodativity is a collection of artworks from Bored Apes Yacht Club (BAYC) and Doodles, with 9,999 artworks created. With a floor price of 0.1Eth and an ever-growing community, SODA (as the community is commonly called) aims to increase ownership of their NFT assets and give back to the community from their proceeds.

Unless you’ve been living under a rock, you would have heard of CryptoPunks. CryptoPunks is an NFT collection on the Ethereum blockchain. There are 10,000 unique punks generated through computer algorithms, hence no two punks look alike. The rarity of these characters makes them a statement of status in the NFT community, and we expect the values of CryptoPunks to remain up there.

Like CryptoPunks, Feudalz is a community of 4,444 computer-generated art collectibles that operate on the Ethereum blockchain. Feudalz aims to bring peace and prosperity to every one of their owners (who are called Peasants) and has a promise of virtual lands in the metaverse coming to the project very soon.

Doodles is an NFT collection of 10,000 unique characters on uniquely colored backgrounds, created by Burnt Toast. As with most other NFT collections, it is a community-driven project. Apart from minting and scaling value with Doodles assets, this community allows the holders to vote for experiences and activations paid for by the Doodles Community Treasury.

There are 10,000 Chain Runners available in the collection, and it has gained so much traction due to its solid decentralized, open-source codebase. Buying one seems more like being a member of a special gang, and with the prices rising at alarming rates, it is a good project to invest in.

CollectVox’s collection contains 8,888 rare and distinct characters called ERC721 with a floor price of 0.0888Eth. Each of the characters has their own identities: facial appearance, job and personality. When you own a VOX, you get a file that allows you to animate and play with them in the metaverse. Seems like a fun project to invest in.

‍Dormant dragons is a set of 5000 artworks that is community-centered. The creators aim to achieve true community by giving holders of Dormant Dragons a token called Smoke which can be claimed at any time, without dealing with high gas fees. These tokens will be used for things such as community engagement, potential babies, and video games. To reward members who are active in the community, they have regular giveaways on their Discord channel.

JRNY NFT Club is a membership NFT that grants you access to future JRNY NFT sets, private community chat and announcements, exclusive NFT videos, early access to partner NFT projects and much more. It contains 10,000 collectibles at a floor price of about 2.346Eth. If you plan to ape into this project, there is much in store, as they have a lot of long-term utility planned for holders, which they plan to show the community in their roadmaps (to be released quarterly).

Gas Squad is a collection of 1111 originally generated soldiers with hundreds of unique elements. Each soldier has his own story and character, as each has been in many gas battles. Your mission is to evacuate soldiers, create a squad, and deploy your warriors to the safe expanse of the BSC network. If you are holding 2 or more soldiers, you automatically participate in regular giveaways of NFT-art.

Launchpad Air Squad is an exclusive NFT project running on the AirNFTs marketplace with a limited edition of 14,000 NFTs with unique AirNFTs branding, minted only for participants of the first ever NFT Launchpad.