Markets may be down, but play-to-earn games are still buzzing. Check out fun NFT games you can start earning crypto with. 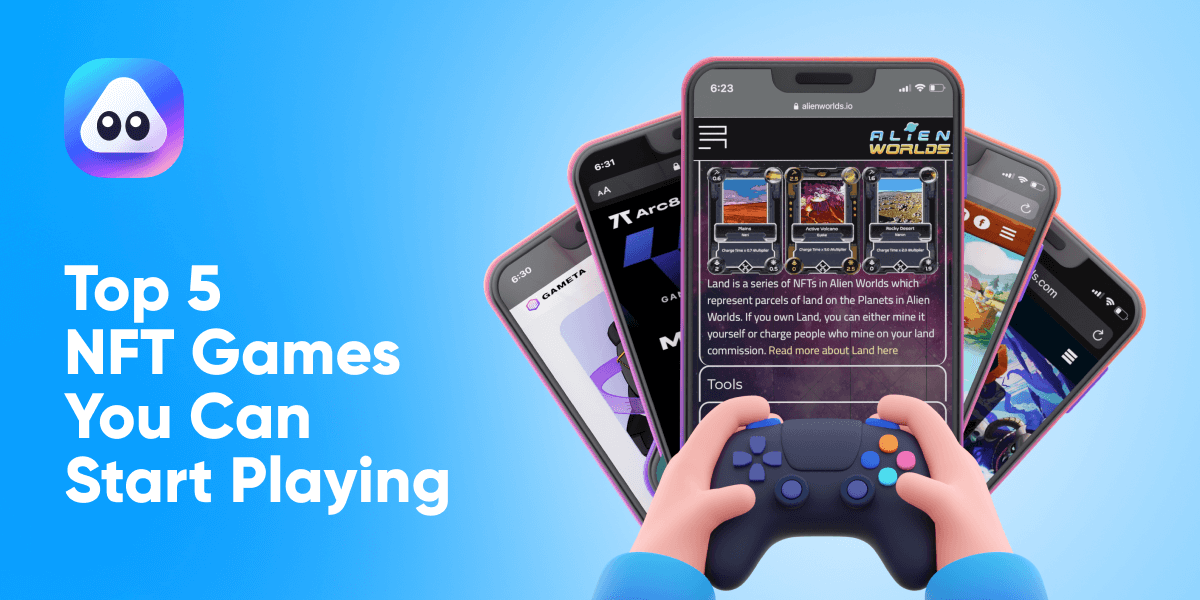 Earlier this year, we posted a blog piece on the top NFT games in 2022. If you read and acted on the piece, you may have added activity to your pastime jar– making money while playing games. If you didn't, the next best time is now.

What is a play-to-earn NFT Game?

Play-to-earn, or P2E games, reward players with crypto or non-fungible tokens (NFTs). They have become trendy in recent years, becoming a central part of almost every metaverse project. Each platform has its form of cryptocurrency to pay online players for their commitment. Earning crypto with real-world value while having fun is one of the main reasons why play-to-earn NFT games have become so popular.

There are a wide variety of P2E NFT games. But here's a look at our top five choices, which you can play and earn with now.

The game's plot draws ideas from a 2055 dystopian earth setting, with many prevalent pandemics. A bitcoin mining community discovered that aliens sent messages through cryptic algorithms. And on deciphering, a wormhole was discovered, leading to other habitable planets. The Bitcoin community traveled through the wormhole, gathering a rare stone, Trillium.

Alien Worlds features six planets in its metaverse, and every asset in the planets is tokenized. The planets feature three kinds of characters: explorers who mine Trillium and earn a part of it as rewards, fighters who contest in arenas for reward, and landowners who rent their lands out to develop the buildings in exchange for money.

Gameta is one of the most recent blockchain game platforms, but it has taken the GameFi world by storm. In what can be tagged the Gameta Fever, over 100,000 new users joined the game in one month (July 9 to August 8, 2022), and being on Solana is an added advantage.

There are seven games on the Gameta ecosystem - Invest Master, Ants Runner, Super Gloves, Sleep Ragdoll, FrogPrince Rush, Human Tower, and Tadpole Count. Gameta's games require little to no technical expertise, can be played with any internet-enabled phone, and it is as easy to play as common games like Temple Run.

Splinterlands made our list of the blockchain games to look out for in 2022. It is one of the most popular card games that allows users to trade and earn online. Splinterland is easy to understand, rewarding, and short– every game can be completed in a few minutes. There are 500 cards split into four rarity levels; common, epic, rare, and legendary. Each rarity level differs in its circulating supply. Asides from earning from merely playing, you can also trade your cards on third-party marketplaces.

Farmer's World prides itself as the first blockchain farming game. It functions on the WAX blockchain and mirrors a farmer's life. The three important items in this blockchain game are food, wood, and gold, identified by their tokens; FWF, FWW, and FWG. The tools needed to get the game's resources can be crafted or bought, but one caveat is that every tool has a durability period. In addition, Farmer's World allows users to sell or gift their resources on a decentralized platform, Alcor.

Arc8 is a play-to-earn gaming platform launched by GAMEE last September. The Polygon-powered app features a variety of games such as puzzles, sports, adventures, etc., and is available on iOS and Google Play for iPhone and Android users, respectively.

Play-to-earn blockchain games, NFT games, call it what you like, sprout every other minute, and keeping up with them is no mere task. So rather than attempting an exhaustive list, we have decided to work with the most popular and rewarding NFT games in vogue.

Which of these have you played before? And what was your gaming experience like?